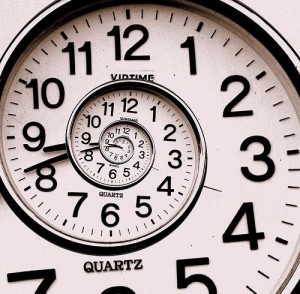 Time slips are amongst the most intriguing and strange paranormal phenomena reported in history. The time slip phenomenon centers on claims that individuals have, for brief moments in time, traveled in time. The means by which they do so are unknown and the phenomenon itself is disputed by much of science, who cannot comprehend that these events could possibly take place and yet, a steady stream of time slip incidents continue to be reported.

The Ghosts of Versailles

Perhaps, the most famous time slip incident took place in 1901 when two women experienced an extraordinary paranormal event in the gardens of the Petit Trianon. Charlotte Anne Moberly and Elaine Jourdain were academics visiting Versailles at the time.

Whilst taking a tour of the Petit Trianon, which is a small Chateau in the grounds of the Palace of Versailles, the two ladies experienced an extraordinary rift in time which transported them back to the time of Marie Antoinette. Their fantastic story was later published under the names of Elizabeth Morison and Frances Lamont. It was called ‘An Adventure’.

After finding the Grand Trianon, which they wished to visit, closed, the ladies became lost after missing a turn for the Alles Deux Trianons. They found themselves in an unfamiliar lane where they spotted a woman hanging out of a window and shaking a white cloth. Elaine also spotted a dilapidated old farmhouse and an ancient plough. At this point, the woman started to experience a terrible fatigue as they were approached by some men who were dressed in tri-corn hats and long grey coats.

These men told them to walk straight on. As they did do, Elaine spotted a cottage where a woman and young girl stood in the doorway. Anne did not notice the cottage but she felt a distinct change in the atmosphere. To her, everything looked unnatural and creepy, dull and lifeless. Light and shade did not work as normal and there was no wind.

Further down the lane, they noticed a man in a cloak and hat sitting. He turned to look in their direction and they noticed that his face was scarred and his expression mean. He, they noted, appeared to be looking straight through them, rather than directly at them. It was as if they were not really there. Eventually, a tall, dark man with long black hair came to them and showed them the way to their destination.

Finally, they reached the gardens they were looking for and, when they did, Anne spotted a lady who was sitting on the grass sketching. The lady was dressed in a summer hat and dress. She had long light hair and her clothes were old-fashioned. Anne claims she looked at the women, but Elaine claims not to have seen the woman at all.
Eventually, the women met a group of tourists exploring the garden and joined in with their tour. This was to be the end of the strange phenomena they experienced.

After their unusual trip was over, the women returned to their normal lives. Perhaps realising the strangeness of the day, Anne later wrote a letter to her sister, describing the strange things she and Elaine saw in Versailles. She also asked Elaine about the day, wondering if she thought it was haunted. Elaine agreed that she thought it was. Both women then set about writing separate accounts of their incredible time slip experience. They then researched and visited Trianon gardens time and time again but were unable to find the strange farmhouse, cottage and various other landmarks from that day again.

After seeing a picture of Marie Antoinette, Anne was certain that the woman she saw sketching that day was in fact the famous French queen. Critics were, however, understandably skeptical of their claims, tending to think that either the two women made the entire story up or that they simply misinterpreted the events of the day.

The Hotel That Wasn’t There

Since Anne and Elaine experienced what they believed to be the spirits of Versailles past, another impressive time slip incident occurred in France. Fans of the British paranormal TV show, Strange But True?, will be familiar with this next case which, as it happens, also took place in France. In 1979, two couples from England, the Gisbys and the Simpsons, were driving through France on their way to Spain. Exhausted after a long day’s driving, they decided to find a hotel to rest in for the night.

The hotel they found was a rather quaint and old-fashioned looking place. There was no glass in the windows and all of the people who visited the hotel bar were dressed in old-fashioned clothing which would have been normal for the 19th Century. The couple had a hearty meal before retiring to bed. When they came to pay, they were surprised that their bill came to just 18 francs for all four of them. Thinking their luck was in, they quickly paid the bill and left to continue their journey.

When making their way back from Spain, they again found themselves in the same area of France and decided that, since their stay had cost them so little, they would try to look up the hotel again. They were, however, dismayed to find that the hotel they had visited was nowhere to be found. Sure that they had taken the right route, they were at a loss to explain what had happened to the quaint and cheap hotel and were forced to find alternative accommodation, where they were charged considerably more than 18 francs for their stay.

It was not until they got home and tried to develop their holiday snaps, however, that they began to suspect that something truly weird had taken place. Both couples found that all of the photos they had taken at the hotel had turned out blank. Seriously spooked by this, they became convinced that somehow they had gone back in time.
This, however, poses some tricky questions. None of the people they encountered at the hotel seemed to be confused by their appearance, their vehicle or the modern money they paid with which is unusual. If we are to assume they were not lying about their experience, it does indicate that there may be much more to time slip incidents than we are able to grasp.

To end this article, we will take a look at Liverpool Bold Street, which has gained a sinister reputation as a time slip hotspot. Liverpool is a large city in the Northwest of England. Since 1990, there have been many reported cases of unusual slips in time reported in the Bold Street area of the city. One of the most famous cases centres on a policeman named Frank.

Frank was visiting Bold Street with his wife in July 1996. It was a lovely Saturday afternoon and the pair had decided to take advantage of the good weather by doing some shopping. Frank’s wife, Carol, wanted to pick up a copy of ‘Trainspotting’ by Irvine Welsh and he wanted to purchase a CD, so the couple split up at Central Station. Carol made her way to Dillon’s bookshop and Frank headed off towards HMV.

After about 20 minutes, close to the Lyceum Post Office which leads on to Bold Street, Frank noticed that everything had gone quiet. He could hear not traffic sounds, no people talking and no ambient nature sounds which was pretty unusual for a busy city centre location, on a sunny Saturday afternoon. Frank was understandably spooked by this when, all of a sudden, a small1950’s style box van sped past him, startling the off duty police officer. Frank noted that the word ‘Caplan’s’ was emblazoned on the vehicle. This was to become an important observation.

Crossing the street to Dillon’s bookshop, Frank noticed that the store had changed its name to Cripps’. It was also no longer selling books but women’s shoes and handbags instead. Confused, Frank tried to take in as much of his surroundings as possible. That is when he noticed that all of the shoppers around him seemed to be dressed in 1940’s style clothing. Except, that is, one young girl who was wearing a very 90’s lime green top. He smiled at the young woman as she entered the Cripps’ store, relieved to see someone who fit into his time frame.
Frank followed the girl into the store when, suddenly, the décor transformed around him and Cripps’ clothing store quickly became Dillon’s bookshop once more. Flabbergasted, he asked the girl if she had witnessed the stunning event, to which she replied: ‘Yeah! I thought it was a clothes shop. I was going to look around but it's a bookshop.’ As quickly as that, Frank was back in 1996 and everything was as it should be.

After frank’s story gained popularity, research into the history of Bold Street was undertaken and it was revealed that both Caplan’s and Cripps’ were both trading companies,, in the area, in the 1950’s and that Cripps’ was indeed located where Dillon’s bookshop stood in 1996.

It is clear that there are many people out there experiencing time slip events, however, whether these people have truly traveled back in time is yet to be seen. Most of us think of time as being a linear event which means that people cannot revisit the past but maybe there is more to learn about the true nature of time or, maybe there is something else going on entirely.

The famous psychiatrist, Carl Jung, had a time slip experience of his own, whereby, he travelled back in time 700 years whilst visiting the tomb of the Roman Empress Ravenna. He believed that it was his consciousness, not his physical body, which visited an earlier place in time.

Time slips being a mental, rather than physical form of travel, is backed up somewhat by the feelings that many people who have had time slip experiences report. Quite often, they will experience bouts of depression, gloom, dread and a feeling of unreality, before, during and after a time slip event. This could point to a psychological origin for the phenomena.

Other researchers believe that there is a connection between UFO’s and time slips, although they are still unclear as to what this connection might be. Loss of time, unreality and electrical malfunctions are all common factor sin many time slip cases.

The truth is, we still do not have enough information to work out exactly what is going on in these cases but they remain one of the most intriguing areas of paranormal investigation to date.